A burner or stinger is characterized by brief, unilateral arm pain, paresthesias or weakness after injuring or a specific inciting event. A burner or stinger is caused by a transient brachial plexus injury (so-called neuropraxia) due to traction, compression, or direct trauma to the brachial plexus. It is often associated with collision sports injuries, such as football, that causes bending of the neck and/or displacement of the arm. Treatment is usually not necessary, and players can return to play when and if there is complete resolution of symptoms.

Figure 1: A “wiring diagram” of the brachial plexus. (from https://en.wikipedia.org/wiki/Brachial_plexus) Most athletes present after particularly high-impact collisions, with immediate onset of unilateral, radiating, and severe burning pain down the arm. This may be accompanied by paresthesia in the related sensory dermatome (the area of skin sensation supplied by a given spinal nerve) and motor weakness. Players may be supporting the affected arm using the other arm to relieve tension. Neck pain is usually not present.

On physical exam, transient sensory disturbances (numbness, tingling, burning, or radiating pain) in affected arm are common(Figure 2). There may be transient, unilateral weakness in affected arm with normal biceps reflexes (Figure 3 – Figure 7[MF1] ). (Transient hyporeflexia may be present in a minority of patients).

Figure 2: The sensory dermatomes as shown on the volar (palmar) side of the arm. Lesions at the given level would be expected to produce sensory changes in these locations, if any. 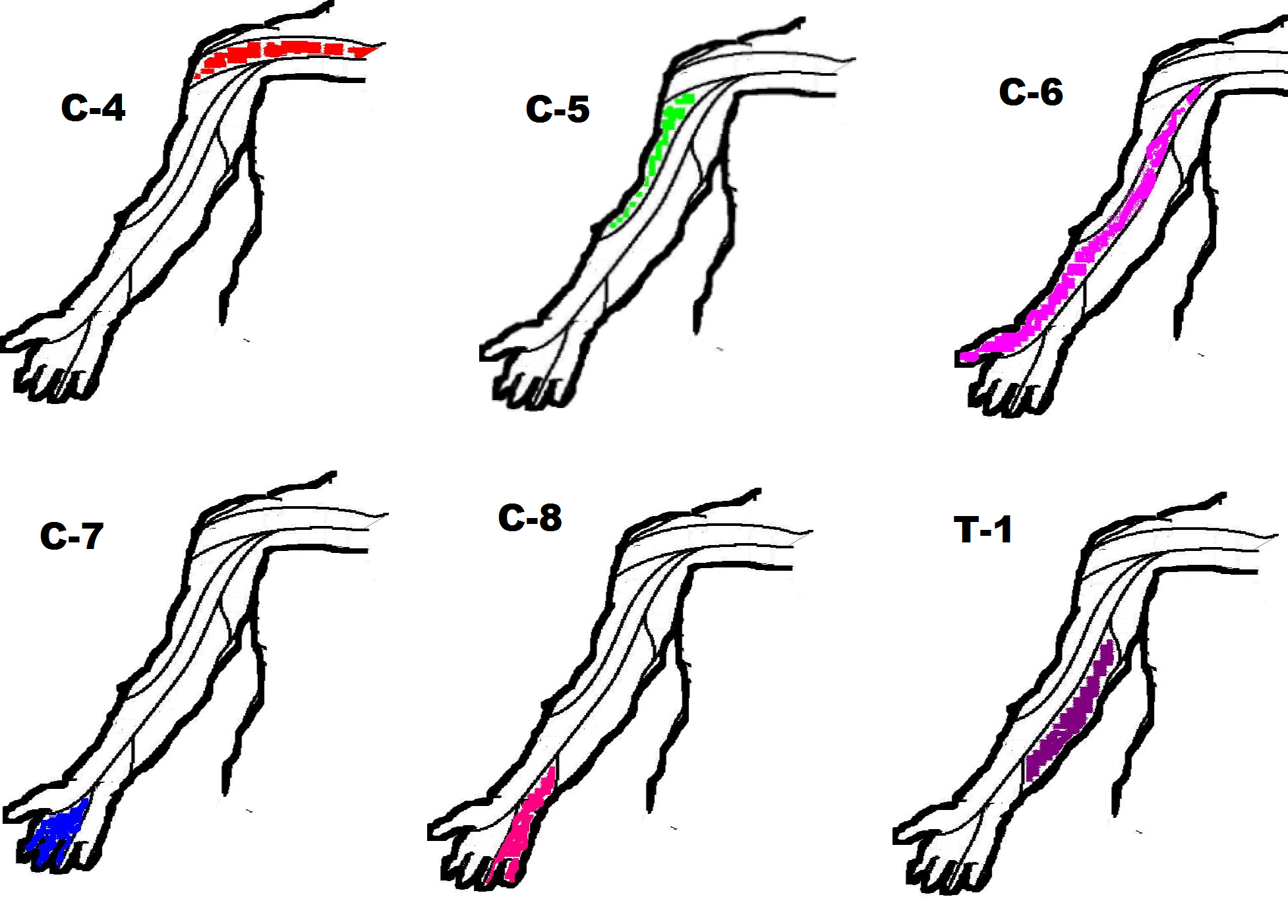 Figure 3: C-5 Motor exam: assessing shoulder abduction. With the elbow flexed, the patient abducts the shoulder to 90. The examiner pushes down on the elbow as the patient resists with deltoid activity. 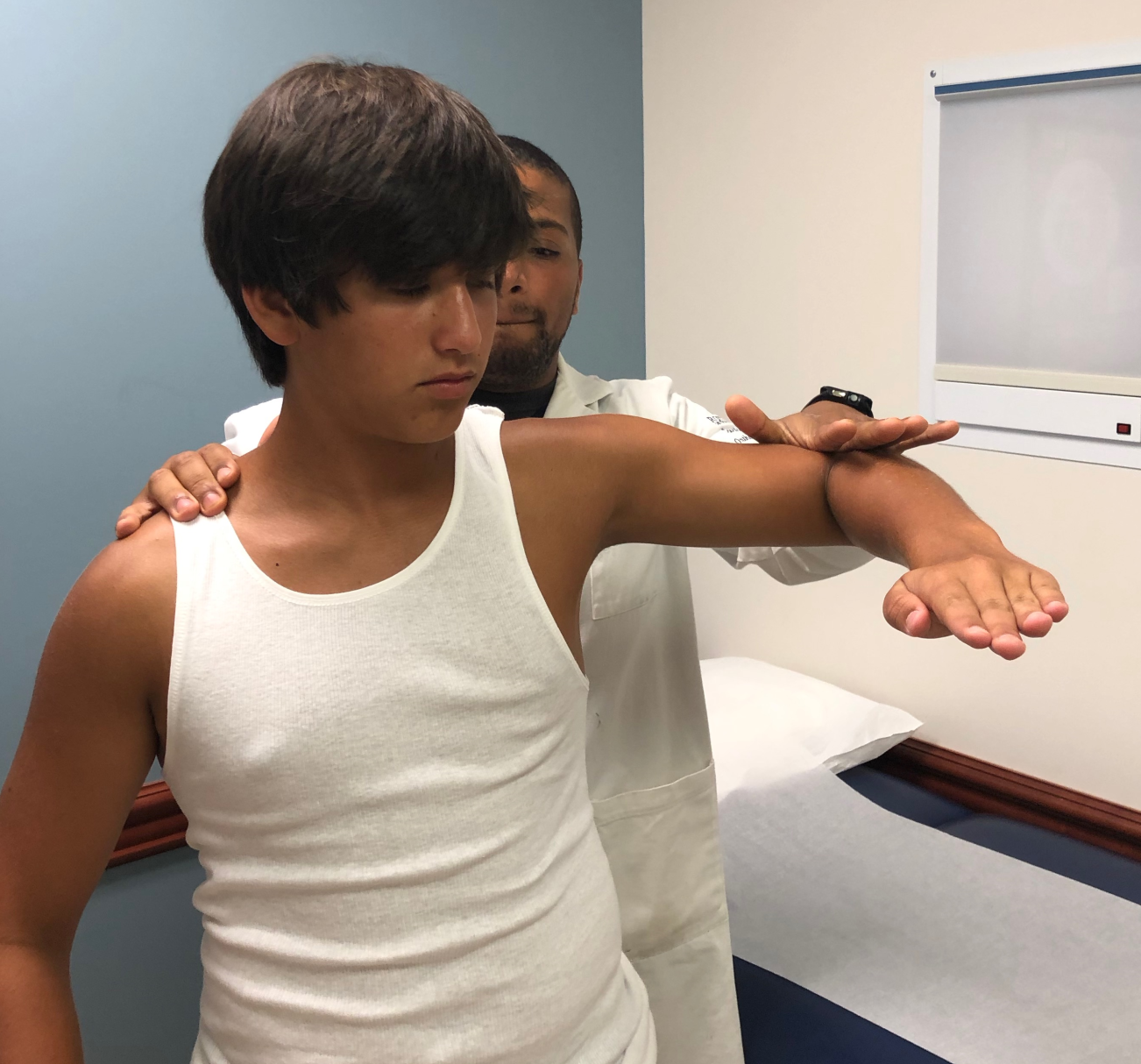 Figure 4: The C-6 Motor exam: assessing wrist extension. With the forearm pronated, the patient extends the wrist. The examiner can assess strength by pushing down on the knuckle of the index finger as the patient resists with radial wrist extensor activity. 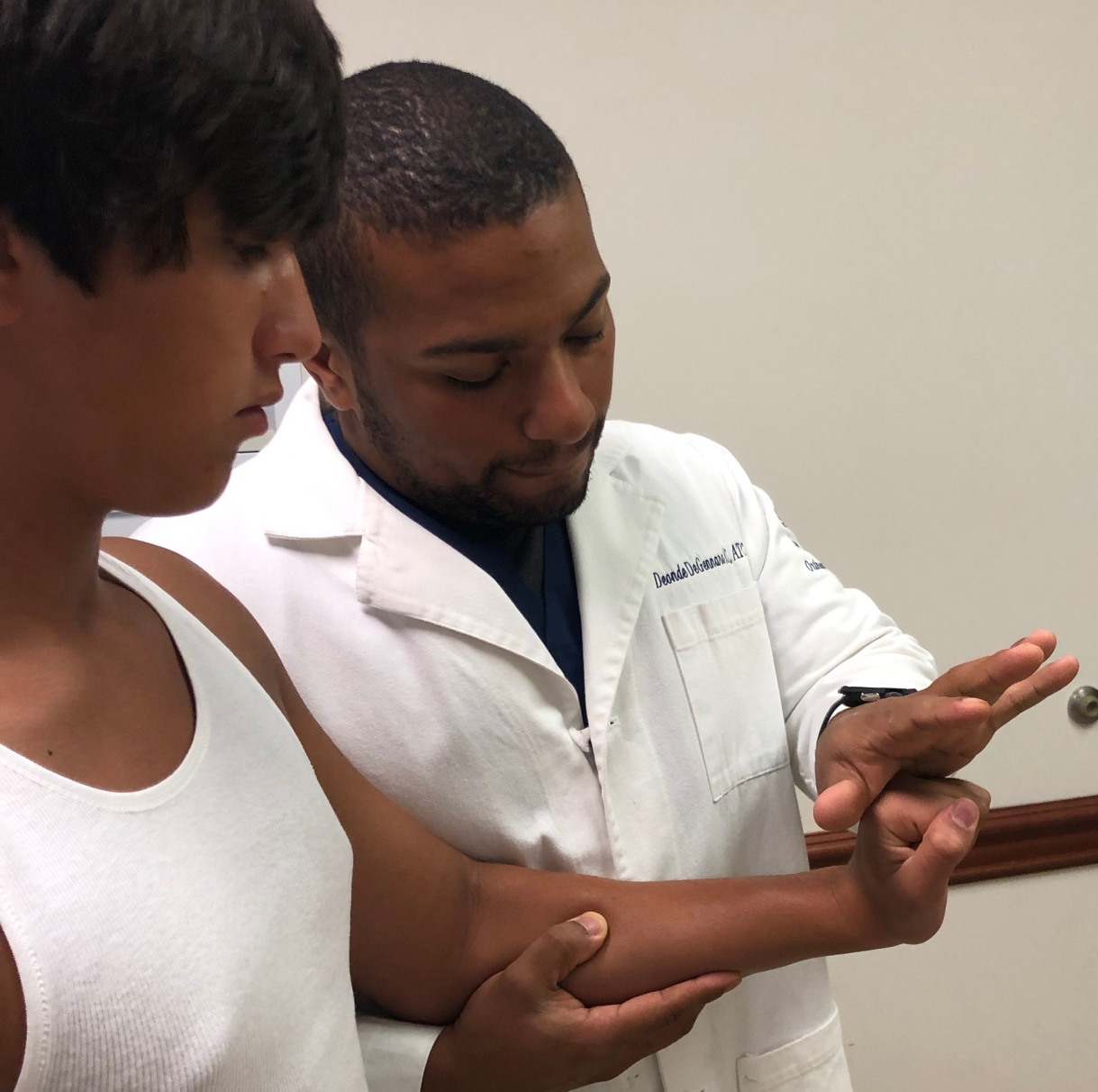 Figure 5: The C-7 Motor exam: assessing wrist flexion. With fingers extended, the patient flexes the wrist. The examiner pushes against the palm to force the wrist into extension as the patient resists. (As with the C-6 exam, the patient's fingers are positioned to eliminate the indirect effect of finger muscles on wrist motion.) 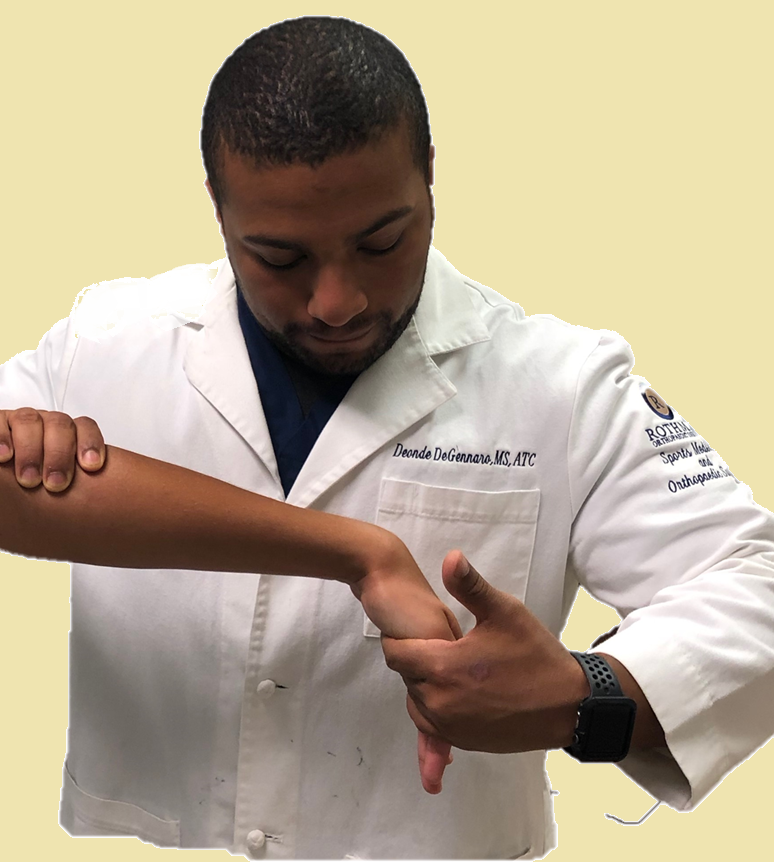 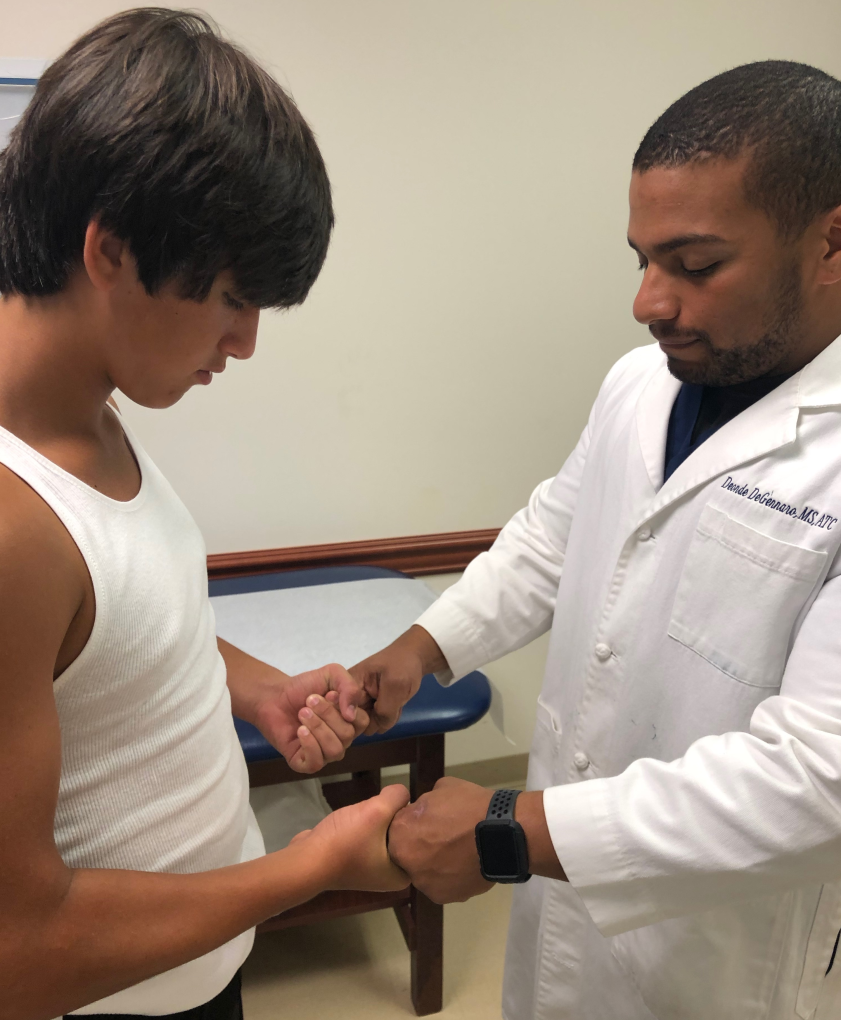 Figure 7: The T-1 Motor examination: assessing finger abduction. Ask the patient to spread (abduct) the fingers and hold that position; the examiner can assess strength by attempting to resist this as shown. The lower extremity exam should be normal, and if it is not, the diagnosis of a stinger is questioned.

All cases of stingers can be classified into 3 grades. Grade 1 stingers are due to neuropraxia (intact axon but demyelinated). There may be temporary loss of sensation and/or motor function up to days. Grade 2 stingers are due to axonotmesis (axon damage). This produces more significant motor and/or sensory deficits which may last up to several weeks. Last, Grade 3 stingers are due to neurotmesis (severed nerves). This may produce enduring symptoms that may never fully resolve.

In most cases of first-time stingers, imaging is not necessary. Initial imaging, if obtained, usually consists of anterior-posterior, lateral, and oblique views of the cervical spine and shoulder area. No abnormal findings are found in most cases of simple stingers. If there are concerns for further pathology due to Red Flag findings mentioned below, and if initial imaging is normal, cervical MRI should be obtained to evaluate the spinal cord, nerve roots, vertebral discs, ligamentous injury, or vertebral fractures.

There are no specific laboratory findings associated with stingers or other cervical spine diseases.

Stingers are most commonly seen in football players, but can also be seen in hockey, lacrosse, and rugby players. This is because the mechanism of injury is usually forced rapid lateral neck flexion, which can occur during tackling and can cause traction or compression injuries to the brachial plexus. It is estimated that over 50% of football players have reported at least one stinger during their career. The true prevalence of this condition is not known, mainly due to its transient nature and the tendency of players to not report or underreport their symptoms.

The differential diagnoses for stingers are relatively narrow but should be considered in any cases when red flags (as discussed below) are present.

If any of the following signs are present in a patient presenting for stingers, further workup should be considered to rule out the above differential diagnoses.

The most important step in treating suspected stingers is to remove the player from play for initial evaluation. A quick but thorough exam of all four extremities as well as the neck should be conducted to assess for findings and red flags discussed in this chapter. A player may return to play upon complete resolution of symptoms and once he/she demonstrates normal strength and range of motion of the affected arm. Recurring or persistent symptoms should be evaluated as discussed earlier. If symptoms last for more than a few minutes, cervical x-rays should be strongly considered to evaluate for fractures or dislocations.

Considering the high incidence of stingers rarely leading to permanent disability, the general prognosis of first-time stingers is excellent. An estimated 85% players are able to return to play within the same game or practice. A history of a prior stinger can increase the incidence of recurrent stingers, but there is no clear evidence of recurrent stingers causing permanent nerve injury.

The most significant risk factor for the development of stingers is playing contact sports that involve tackling. The majority of such players encounter at least one episode of stingers during their career. The presence of cervical canal stenosis has been associated with increased risk of stingers in athletes.

The three terminal branches that form the famous M of the brachial plexus, in order from lateral to medial (musculocutaneous, median, ulnar), can be recalled by thinking MuMU (µ, M in Greek).

Draw a “wiring diagram” of the brachial plexus from memory. (It’s always on the test!) Perform a comprehensive physical exam to evaluate neurologic signs and symptoms. Counsel players on safe sports techniques and appropriate equipment to reduce future recurrences.