x Disorders of the Extensor Mechanism of the Knee JB (3).docx

Disorders of the Extensor Mechanism of the Knee

The extensor mechanism of the knee comprises the quadriceps muscle and tendon, the patella, and the patellar tendon (also known as the infra-patellar ligament). Disruption of any of these components impedes a person’s ability to actively extend the knee or resist passive flexion. Such injuries are therefore incompatible with normal walking and standing. Failure of the quadriceps or patellar tendon is often, but not always, preceded by painful tendinopathy.

The quadriceps muscle, as its name implies, is composed of four muscles: the vastus lateralis, vastus intermedius, vastus medialis and rectus femoris (see Figure Figure 1). All but part of the rectus femoris originate on the femur itself. These muscles converge at a point approximately 5 cm proximal to the patella to form the quadriceps tendon. The quadriceps tendon has multiple layers, with the rectus femoris as the most superficial layer, the vastus medialis and lateralis as the middle layer, and the vastus intermedius as the deepest layer. The superficial layer is well vascularized; however, there is a hypovascular zone in the middle and deep layers approximately 1-2 cm proximal to the patella. This is the most common site of rupture.

Figure 1: Anatomy Anatomy of the extensor mechanism. The quadriceps muscles are  are outlined in red, and their common tendon and the infrapatellar ligament are in yellow. Both attach to the patella, outlined in gray. (Original x-rays from https://radiopaedia.org/cases/normal-knees-x-rays) 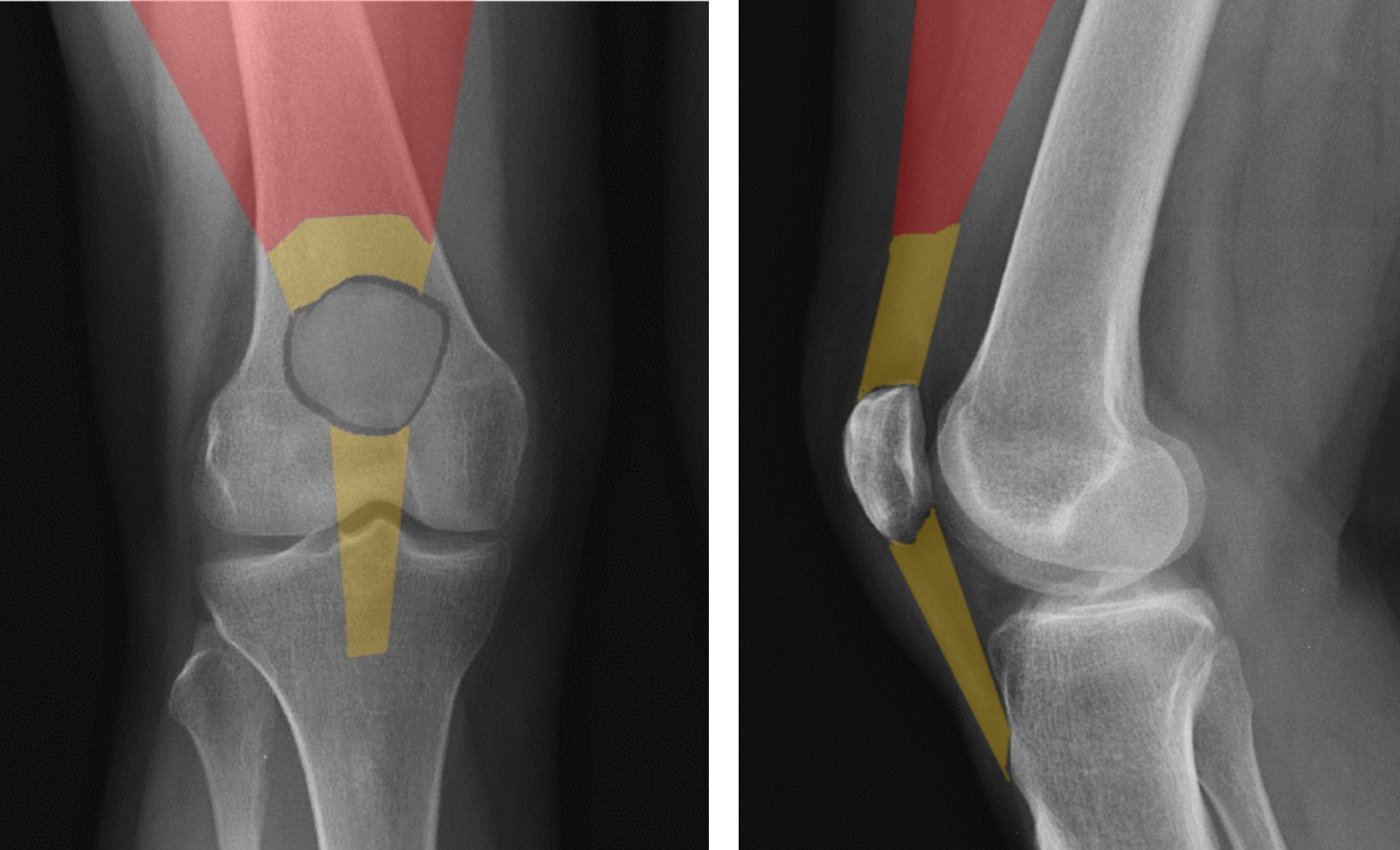 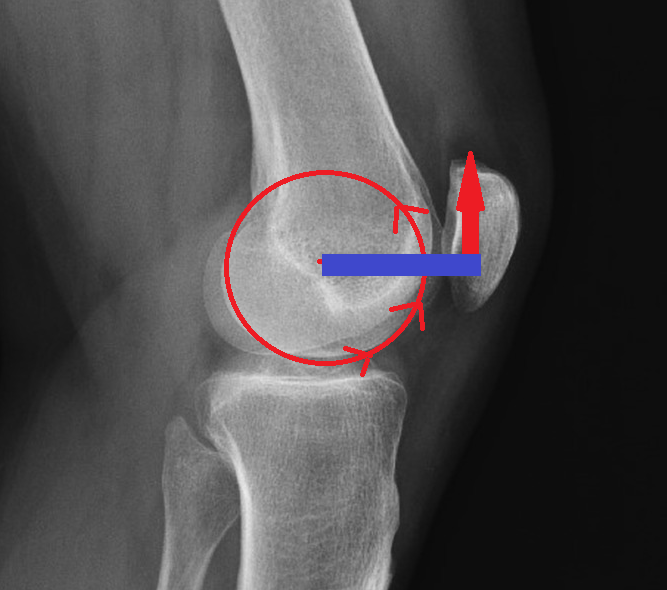 Figure 3A: Direct palpation of inferior pole of the patella. This is painful if either patellar tendinitis or infrapatellar bursitis is present.

Figure 3B: Pinching the

bursa, as shown, will be painful if bursitis is

present and not painful if the underlying pathology is deep to that, e.g., in the tendon. If palpation is painful but pinching is not, the diagnosis of tendinitis 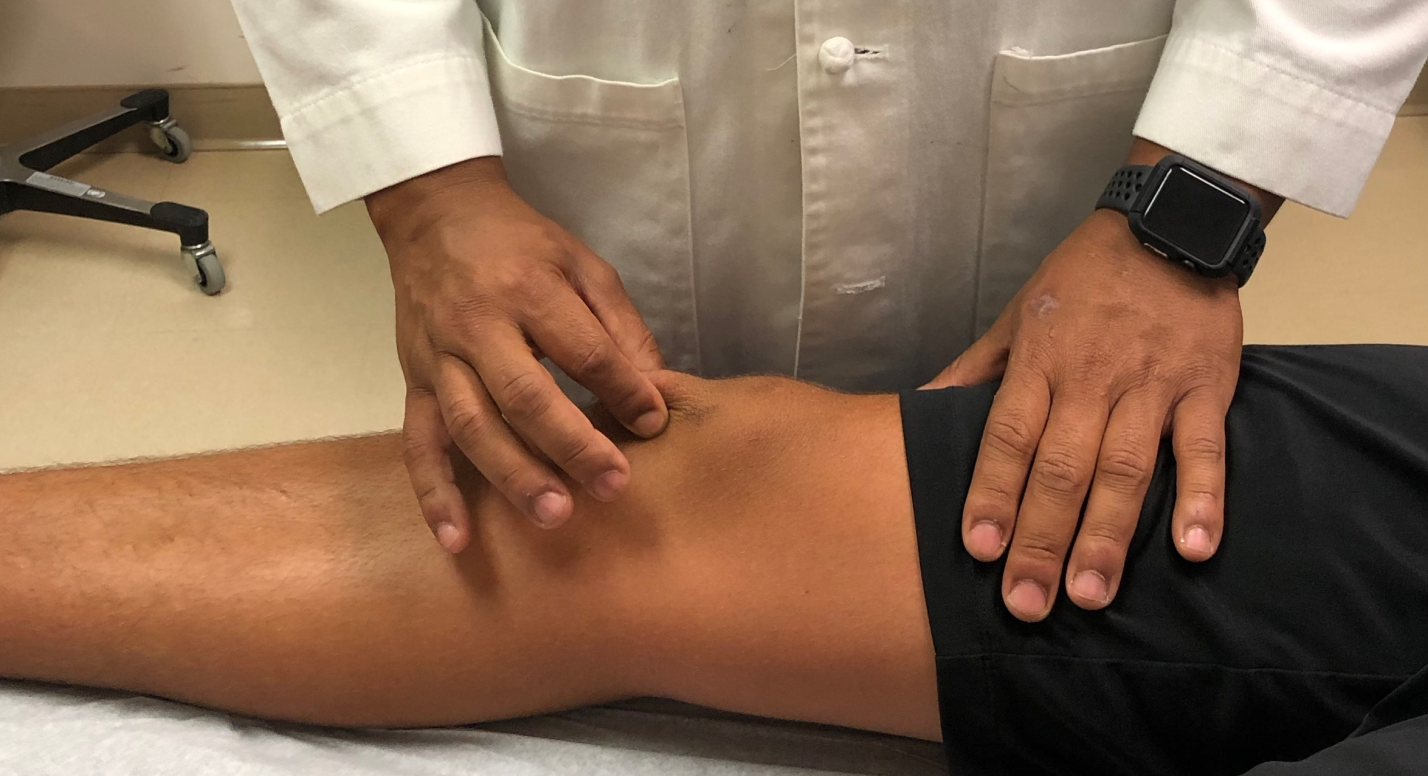 When either tendon is completely torn patients are unable to extend the knee, perform a straight leg raise, and often cannot bear weight on the injured leg. (That is because in stance phase, the center of gravity of the body is behind the center of rotation of the knee joint and tends therefore to flex it. In ordinary circumstances, the knee does not buckle, and the patient is able to stand upright only because of the resistance to flexion provided by the extensor mechanism.)

Plain radiographs should be obtained to rule out fractures if the mechanism suggests that one may be present. Radiography can also help identify a soft tissue injury, as a lateral view x-ray will confirm displacement of the patella. A distally displaced patella (patella baja) and a proximally displaced patella (patella alta (see Figure Figure 4) are signs of quadriceps and patellar tendon rupture, respectively. 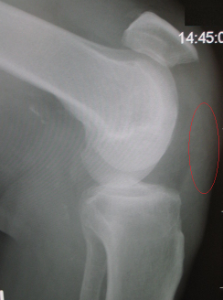 If there is any question whether a disruption is present, an MRI may be helpful. MRI cannot only differentiate between a partial and complete tear, it can localize the injury and provide information about the quality of the surrounding tissue (Figure Figure 5).  This   This latter information may be useful for surgical planning. 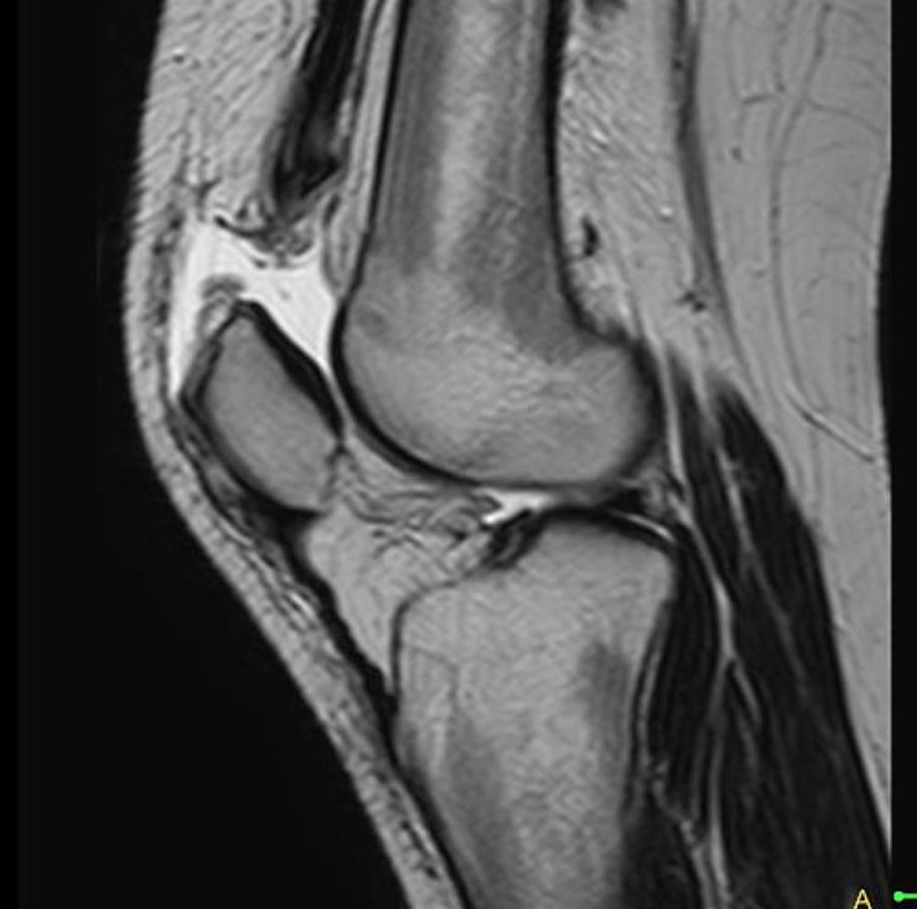 The differential diagnosis for focal anterior knee pain includes not only tendinopathy but patellofemoral pain syndrome (with or without patellofemoral arthrosis) and bursitis. Of course, these can coexist. A detailed physical examination with imaging can usually differentiate between these diagnoses.

Once it is determined that the extensor mechanism is disrupted, the differential narrows to injuries of the quadriceps tendon, the patella itself and the patellar tendon. Bony injuries in the absence of a direct blow can be assumed absent, though at times patients fall after they tear their tendon making the history a little less clear. X-rays are therefore helpful. Films obtained with the knee in flexion can also indirectly document a soft tissue injury as the patella will be in an abnormal position. Noting the patient’s age (again, age over 40 is likely to implicate the quadriceps, and age under 40, the patellar tendon) though of course a physical examination may pinpoint the problem more exactly.

In general, tendon injuries do not herald other problems, though the presence of one tendon injury may foreshadow another, and of course tendinopathy itself may suggest an impending rupture.

Because tendinopathy is often an overuse injury, a good first line treatment is relative underuse. Dialing back on activity may allow the body to heal the tendon lesion.